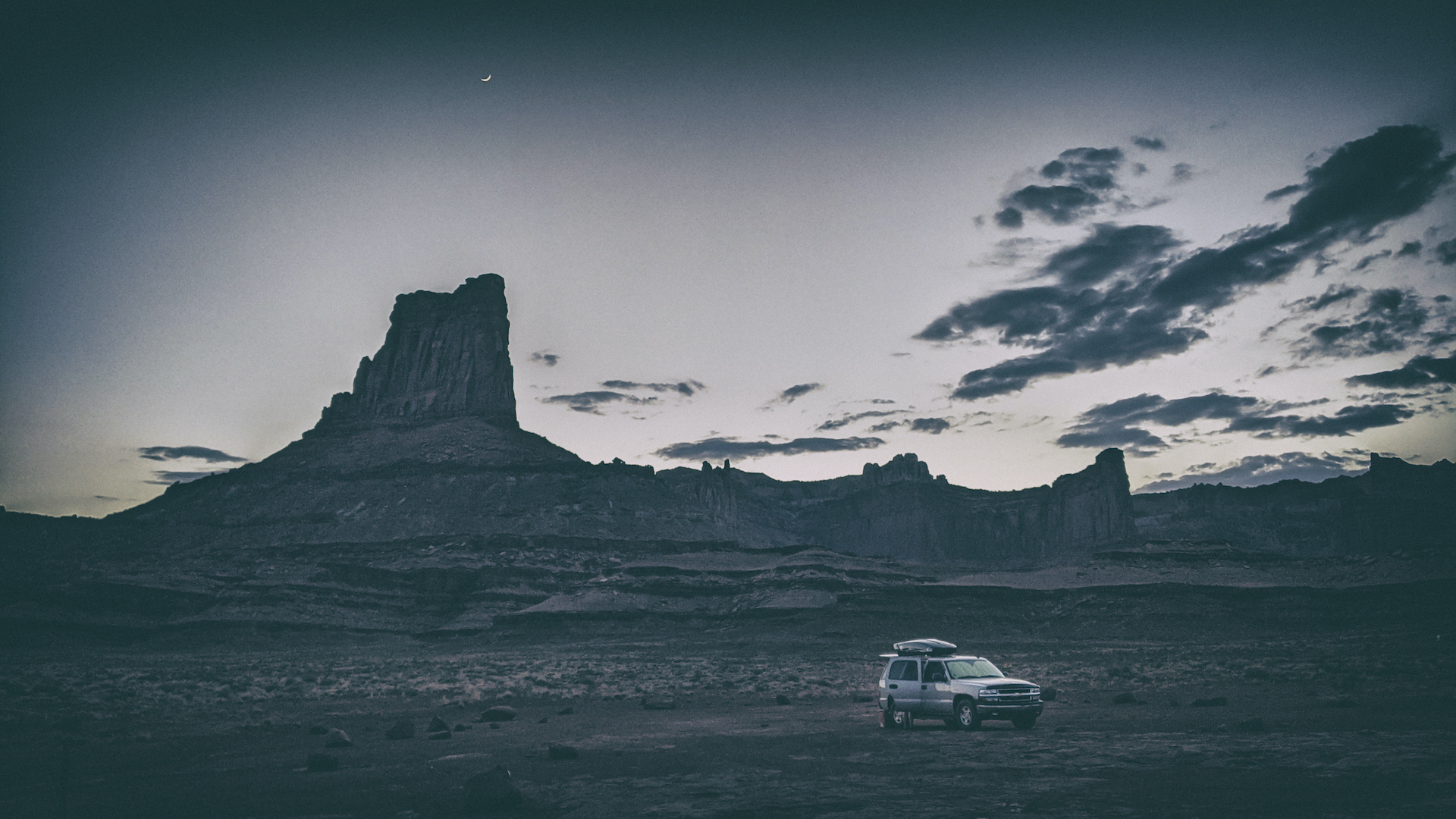 Back in September of 2020, I visited Moab, Utah with my parents. While we were there, we visited Canyonlands National Park where I happened upon information regarding the White Rim Road (or White Rim Trail as it is sometimes called) which forms a 100 mile loop through the backcountry of Canyonlands. To be more specific, I happened upon A Naturalist’s Guide to the White Rim Trail by David B. Williams and Damian Fagan. With this, I planned an overland adventure through Canyonlands for the Spring of 2021.

I started by reading through the guidebook cover to cover during the holidays. Based on my readings, I reserved two campsites via Recreation.gov, Airport B and Hardscrabble A. According to the guidebook and some online research, it seems that many people drive the road in two to three days so I decided to do three days since this would be my first time taking on a trip like this. The campsites at Airport Tower were about 25 miles into the trip and the campsites at Hardscrabble were about 75 miles in. This meant my second day would be the longest distance to cover but my first and third day would give me plenty of time to make the trip to and from Salt Lake if necessary.

I should also mention, when you reserve your campsites you also need a backcountry permit from Canyonlands. There are instructions for how to do this on their White Rim Road page. Please note, these can be hard to get as there are limited quantities. The National Park Service releases permits at certain dates and times so be ready to scoop those up when they become available.

With a three day plan in place and campsites reserved, I spent most of the winter and early spring preparing my Chevy Tahoe for the upcoming adventure. I desperately needed new tires so I took this opportunity to get something that would fare well in the desert backcountry. My local shop, Little Garage, hooked me up with a set of Cooper Discoverer AT3’s. They’re the perfect amount of off-road capability mixed with the comfort and quiet I want for cruising on long stretches of highway, all for a price that fit perfectly in my budget. I was originally hoping to get BF Goodrich K02’s, which I’ve heard really good things about as well, but they were hard to come by at the time due to COVID-19 supply disruptions.

The next thing I did was build a little hitch rack to carry an extra 5 gallons of gas and my 5lb propane tank for my camping grill. I decided I didn’t want to have these things in the car with me (fumes and spillage, you know) but I also felt putting them in my roof box might be too heavy. This may or may not have been a good choice, you’ll see why a bit later in this article.

Regardless, I was able to source some scrap metal from a local shop and build out this little rack for just $30 including all the hardware and everything!

Time for an Adventure

On Thursday night, we headed down to Moab and camped on BLM land just outside of the city. I was able to find a spot with decent cell service so Amanda and I could check into work on Friday morning before heading out onto the road. We had about 25 miles to cover to get to our first campsite on Friday night, Airport Tower, so I didn’t want to start on the White Rim trail too early on Friday.

Amanda still had to be within service for work so we decided to have a late lunch in Moab to kill some time. Around 3, I decided we should at least head to the Canyonlands Visitor Center and it was lucky I did because we when we got to the park entrance we found a tremendous line of cars. Turns out, we had to sit in line for almost 2 hours to get into the park!

When we finally got through the gate, we made a quick stop at the Visitor Center then we set off on Shafer Canyon Road which takes you down several thousand feet into the canyon and towards the start of the White Rim Trail. We passed several cars on Shafer Road but, at the bottom of it, there is a sign declaring no one beyond that point without a backcountry permit which we had. We continued on.

Travels were smooth and steady on Friday afternoon. We saw some amazing views of the Colorado river and did a few short hikes. Our arrival at Airport Tower and our camp for the night was around 8 o’clock which was perfect time to make some dinner and relax a bit as the sun went down. The sky was mostly clear Friday night and it was almost a new moon so we saw some pretty amazing stars once it got dark.

Saturday morning we woke up refreshed and ready to continue our adventure. Around 9 am we finished up breakfast and noticed a few other caravans already making their way down the White Rim Road. We had about 50 miles to cover before our next campsite at Hardscrabble Hill which seemed like it would be easy to cover in a full day. How naive we were.

We packed up our things and got on the trail by about 10 am. Initially the road was very similar to the previous day and we made our way to the Southernmost tip of the trail, the White Crack camp, which provides a tremendous lookout point where you can see both the Colorado and the Green rivers.

After this, things started to change. The trail started to get rougher with more rocks and obstacles. We also started to see less people at this point except for more purpose-built vehicles and off-road motorcycles. My homemade rack, which had been doing well so far, broke to pieces due to the constant unevenness of the road. Then we hit Murphy Hogback.

Murphy Hogback is one of two locations described within my trail guide as “4×4 Low Recommended” and I believe that to be an understatement. As you can see in this video uploaded by Kyle Bradshaw, the uphill portion of Murphy Hogback is quite steep with a sheer cliff directly to your left and it is not a smooth road to the top. Never have I white knuckled my steering wheel harder getting my Tahoe up that hill. And I was thankful for my 4×4 Low gear or else I don’t know if I would have made it!

At the top, we pulled off to the side of the trail to take a rest, use the restroom, and enjoy the view. We thought the hardest part of the trail was behind us now but we were sorely mistaken. Continuing on, one must drive down the other side of Murphy Hogback which is arguably just as difficult as the way up. Driving through switchback after switchback, we made our way down to the level of the Green river. At one point, we were so close to the river that we were able to walk down and dip our feet in which felt like something not many get the chance to do.

As the it got later in the day, we arrived at a trailhead that we decided to hike. We had to get out of the car for a bit and take a break from the roughness of the trail, it was determined to break us. We hiked on a trial just past Hardscrabble Hill, which is the second and final part of the trail where “4×4 Low” is recommended. Hardscrabble was much more relaxed than Murphy but it was equally as steep. After reaching the top, we parked and got out for a beautiful hike with panoramic views of the Green River. We could also see our second campsite from this hike, at last!

Just before the sun dipped behind the canyon for the evening, we pulled into our second and final campsite of the trip. To say we were exhausted was an understatement. We threw our camping chairs out and fired up the Jetboil. This was one of those times where Amanda and I were so exhausted and hungry that we ate in complete silence. Only after polishing off the pesto pasta we had made in the Jetboil did we begin to discuss the day’s events.

We couldn’t believe how intense this trail was! We felt like we had been lied to! Or maybe our research wasn’t thorough enough! Regardless, we had seen some pretty amazing things over the past 48 hours but we were glad to be done with it. The 50 miles we travelled took nearly the entire day, sunrise to sunset! Luckily, tomorrow we only had 25 miles to go and we were back on nice, easy, paved roads.

After the two days of traveling on the White Rim Road, we slept like the dead. Sunday morning, we woke up still feeling rather drained from the previous day’s journey but we got an early start knowing that the trip was almost at an end. We packed up the Tahoe once again and headed out on the trail. This time, things were mostly sandy and smooth. We drove along the Green River until we hit the Canyonlands National Park boundary.

After that, we were in the Glen Canyon Recreation Area still driving on dirt roads, but much smoother dirt roads, as we made our way back to the main highway. The final hurdle of the trip was driving up a steep and winding dirt road that goes up out of Glen Canyon and back to the road near the Canyonlands main entrance. Our only consolation here was that we could see van after van laden with canoes and tourists were driving up and down this treacherous looking road no problem.

Amanda and I agree that this was a tremendous adventure that we are happy to have gone through but, if given the choice, neither of us want to do it again. I guess that means our next camping vehicle doesn’t require any aggressive off-roading capabilities!

An update since I originally posted this article: it turns out A Naturalist’s Guide to the White Rim Trail is hard to find on the internet without spending a small fortune. Please note that this guide is available in the Canyonlands Visitor Center for no more than $15!