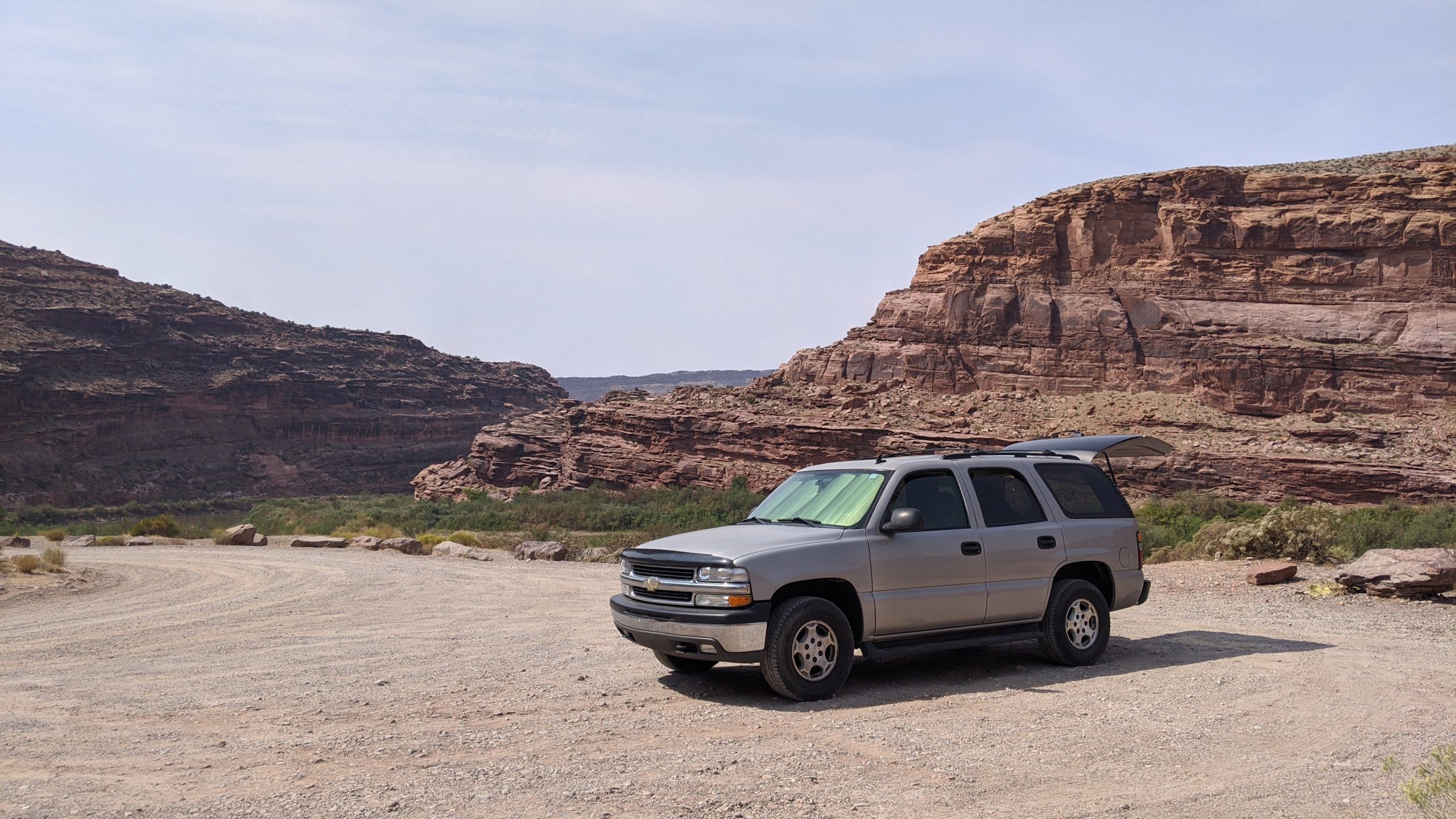 Shortly after building my very own camping vehicle, and publishing my guide on how you can do it too, my state (and country) went into a stay at home lockdown due to the COVID-19 virus. Unfortunately, this meant that I didn’t get to take many of the trips I was planning at the start of the year but once the restrictions were eased a bit, I started to take some small trips to some of the more remote areas near me.

Before we get into the trips I have taken in my Tahoe thus far, I wanted to mention a few upgrades that have been made since my last post. First, was the radio. Unfortunately, I didn’t take a before picture but the stock radio from 2006 was pretty bland. It didn’t have any features of modern radios except that it had a CD player and an FM/AM transmitter. That desperately needed to change.

Here you can see I decided to go with a new Sony head unit. I researched a lot of radios before I landed on this radio. I was strongly considering getting something with the ability to install a backup camera, which is the one feature newer cars have that I really wish I had in this, but I just couldn’t find any options that fit might budget and wouldn’t require any actual modification to my vehicle.

The main feature I wanted was Bluetooth music capabilities (or AUX input at least!) and this Sony radio allows you to connect two phones via Bluetooth. Perfect for a couple who plans on taking a lot of trips together!

The stereo I purchased is the Sony MEX-N5300BT from Crutchfield which included a kit that would allow me to install everything without any modifications and even retain the steering wheel controls for the radio! It was important to me that the new radio was still pretty close to the OEM unit in terms of form and function but you could definitely save some money if you don’t care as much about this.

Another addition you can see in the image above is a digital thermometer I bought to monitor the temperature in the car. While not totally necessary, my Tahoe has an OEM thermometer to measure outside air temperature and I was curious what the temperature is like on the inside while we’re camping. Turns out, it retains heat pretty well on cold nights!

It was also a total coincidence that the thermometer I purchased fits so nicely in the cubby under the new Sony radio. Finally, the last addition in this image is the small level in the bottom right corner. Again, not super necessary, but I bought these stick on levels to measure the tilt of the vehicle, mostly to ensure I’m not sleeping on a weird angle. I ended up sticking this one here on the dash to measure left to right tilt, and another that is oriented lengthwise to measure forward to backward tilt.

Once again, I did a poor job of taking pictures while working on this mosquito netting mod but here’s the final product! This one was pretty simple, I ordered some mosquito netting by the foot, some small round magnets, and some good ol’ fashioned duct tape.

All I did was stick the netting to the window using the magnets, cut out the shape and size I needed, then stuck a layer of duct tape over the magnets to keep them in place. If I had a sewing machine, I would’ve sewn a nice edge of fabric on to the netting to hold the magnets instead but I had to make do with the tools I have.

I made one for the driver window and one for the passenger window. Now we can roll the windows down to get some airflow at night without getting eaten alive by mosquitos!

Finally it was time to make the bed and head out on an adventure! In this picture, you can see I’ve laid out one of my favorite camping essentials, our Kelty Bestie Blanket.

I checked the weather for Orangeville, Utah, which is the nearest town to the world renown bouldering area Joe’s Valley, and it was only supposed to go down to the low 40’s at night the next few days. I packed my crash pad, climbing shoes, extra water, food, a camp chair, my cold weather sleeping bag (just in case), and headed out!

Out in Joe’s Valley, I established my home for the weekend. In these pictures you can see my DIY mosquito nets in use and also my Heather’s Original Heatshield. Definitely worth the money, these are fitted precisely to your vehicles windshield and they block light, heat, cold, everything.

There was still a little bit of snow here and there in the valley but the temperature was a perfect 60 degrees and I was excited to do some of my first climbing of the season. Climbing on rocks really is some weird combination of childhood nostalgia and primal ancestry. It’s just so fun in the best ways. I climbed all my favorites in Joe’s that were dry (don’t climb on wet sandstone!) and I tested out some harder stuff to no avail. Also ran into some pretty cool people along the way.

The next trip we took in the camping Tahoe was in April. A little back story here; as many of you know, 4/22 is Earth Day but it also just so happens to be the day my partner and I started “officially” dating just 5 short years ago. For one of our first anniversaries, we decided to celebrate both our milestone and Earth Day by going camping somewhere together.

That year we went to Hocking Hills, the second anniversary we graduated from Ohio University so we couldn’t really take a trip, the third anniversary was Zion National Park, and the fourth was Valley of the Gods. For year five, we wanted to continue our tradition but we also wanted to be safe and respectful in regards to the Coronavirus outbreak.

We realized the Bonneville Salt Flats were just a short distance away and there was no way we would run into too many people out there! So it was decided, we packed up the Tahoe and headed to the Flats! However, before you head out there to do some camping yourself, be sure to read up on the BLM website as camping on the actual salt flats is not allowed. Luckily, there is an abundance of BLM land that surrounds the Salt Flats that is perfectly fine for camping.

Here we are west of the Flats, setting up camp for the night and preparing to make some dinner. Not pictured: my partner and our two dogs who are off running around in the vast emptiness.

I learned from my earlier expedition to Joe’s that a table is an absolute necessity when your camping vehicle really only has a bed and some storage space in it. At some point, I plan on purchasing a camping table that is a bit easier to setup and teardown but for our spontaneous trip to the Salt Flats I just brought this Ikea table from our patio.

You can also see the storage bin I mentioned in my previous post being used with various food items, utensils, mugs, a towel, etc. We also brought a cooler for this trip since we would just be there overnight and planned on eating everything that needed refrigeration.

By sheer coincidence we happened to wear very similar outfits on our outing, sorry. I wanted to share this photo, however, because you can really see the salt. The Salt Flats are very rough and hard, which I guess I should have expected but was still surprising to me. It also tastes extremely salty (it is salt) and we’ve heard of people using it to salt the rim of their margaritas!

Even thought the bed is about the size of a full mattress, I was extremely comfortable this way and felt like I had plenty of room. It definitely beats our backpacking tent and pads we used to always sleep on!

Most of our evening on the Salt Flats was spent enjoying time away from our phones so I didn’t take too many pictures and it was actually very refreshing. Especially considering all of this Coronavirus pandemic stuff that’s been going on, it was nice to take a break from the devices and get out under the stars for an evening.

You can see our sleeping situation a little better in the picture above. For two average humans and two 35-ish pound dogs, it’s just so cozy and comfortable!

Here are a couple more pictures I have from recent adventures. Once the COVID restrictions were lifted a bit, we were able to start paddle boarding! You can see the Tahoe has no problem with lugging a couple of paddle boards around on the roof rack.

One final thing I wanted to share, when we got back from the flats, my partner wanted to contribute to our camping Tahoe in some way. One of the things she spends a lot of time doing is making various things with macrame like plant hangers and wall tapestries. So here’s a picture of a little macrame pennant she made for the truck!

Thanks for reading, please check out some of my other posts, and if you have any questions for me; feel free to ask in the comments!

One of the upsides of having the bench seat in the front is that our Border Collie mix, Faye, can ride with me while we’re cruising along the highway!